On October 6, 2018, just a week after his “family and name” were “totally and permanently destroyed” by “a calculated and political hit” undertaken as “revenge on behalf of the Clintons,” the man formerly known as Judge Brett Kavanaugh was sworn in as the 114th justice of the Supreme Court of the United States.  Chief Justice John Roberts administered the oath of office while Judge Kavanaugh’s miraculously resurrected wife, Ashley, held the bible upon which her now nameless husband swore his oath, their risen daughters, Liza and Margaret, looking on with pride as their father ascended to his seat on the most powerful institution in American politics.  Justice X had lost his name and family, but he had achieved his dream.  His accomplishment was deemed so momentous that all involved in the original ceremony, save Chief Justice Roberts, who was replaced by his understudy retired Justice Kennedy, reprised their roles only two days later, reenacting the event at the White House before a partisan audience who the Unknown Justice thanked profusely for elevating him to the pantheon of American jurisprudence.

The Clintons’ revenge was complete.  The Party of Personal Responsibility was no more.

How We Define One Another, Endlessly.

No political philosophy, whether premised on rugged individualism or inexorable collectivism, can capture what it means to be human.  Each of us defines who we are by those who surround us, whether through crass comparisons of us v. them, or through how we affect others, positively or negatively.  And because we are constantly measuring ourselves using those who surround us, who are doing the same thing, who we are changing constantly.  No Western political philosophy is capable of capturing this reality.  It may be able to hold it bay, as neoliberalism does today, but at some point the differences between what is observed to what a political philosophy forces us to expect become so great that everything breaks.

Human beings do not experience life, they interpret it.  They compare what they observe to what they expect, and react accordingly.  You can control how a person interprets his life by controlling what he observes, what he expects, or (usually) both.  Unfortunately, if you abuse that control, people are likely to doubt what they observe, what they expect, or (usually) both.  That's how revolutions come about: people rise up to force the world to match the expectations that were forced upon them.  While neoliberalism successfully avoids the "communistic fiction" of classical liberalism, it still requires fairness, that the game not be rigged, that anybody through hard work and good judgment can rise to the top.
Posted by Tao Jonesing at 9:56 PM

The Post-Ethical Society, or the Death of Shame

As I have previously discussed, my survey of the political philosophy of Plato and Aristotle has led me to conclude that both men were seeking to develop a perfect state that would be highly scalable and long-lasting (if not perpetual).  They were trying to establish what I will call here a "Ruling Paradigm," a comprehensive structure for establishing and maintaining social order that could scale infinitely over time and space (within the limits imposed by the confines of the Earth, of course).  Their approach was holistic and sought to embrace all aspects of life, public and private.  With the exception of Plato's Republic, which was openly totalitarian, both men promoted the idea that the laws of the state should be explained to its citizens so as to persuade them that the laws were just.  Further, both men seemed to agree that the purpose and guiding principle of the state is to maximize its citizens' happiness by helping them to lead a virtuous, ethical life.

The Ruling Paradigm of the "states" they proposed have three key features: founding myths, laws and ethics.  All three of these features are found are in the first five books of the Hebrew Bible (aka the Torah and the Pentateuch), a fact which, along with other evidence has led me to conclude that the Torah was written as the basis of a Panhellenistic state applying the political philosophy of Plato and Aristotle. These three features have been the foundation of Western Civilization ever since, and may be found in Christianity (a Romanized version of the Greek "Abrahamic" state) and, more recently, in the Classical Liberalism (a secularized version of Christianity) that emerged from the Enlightenment and Protestant reforms and persisted until the mid-1980s.

Neoliberalism-- the current Ruling Paradigm of Western Civilization-- represents a major break from the past because it is wholly lacking in ethics.  In their desire to eliminate the "communistic fiction" of Classical Liberalism, the founders of neoliberalism disappeared the Common Good and removed any discussion of ethics, which presupposes the right of the collective to judge the individual.  While one could try to argue that the concept of "Liberty" that is a centerpiece of neoliberalism/libertarianism somehow provides a basis of an ethical code, but neoliberal "Liberty" is negative liberty, that is, liberty defined by the limits of state power, not as a positive liberty, which is an individual right.  Neoliberal "Liberty" exists so long as there is an area in the individual's life in which he is free to decide without government compulstion.  Not coincidentally, neoliberal liberty seems to be the flip-side of the neoliberal conception of the  "free market."  As long as the individual is free to choose among the goods offered him by the market, then he is fully enjoying "Liberty" according to neoliberals, regardless of what other oppression the government imposes upon him, even if that oppression takes the form of forcing to make a choice that he would not have to make absent government interference (e.g., Obamacare).

The emergent result of the neoliberal experiment is what I am coming to think of as the "Post-Ethical Society," in part because of the deliberate exorcism of ethics from the Ruling Paradigm of neoliberalism, but mostly because of the hubris and venality openly displayed by the Ruling Elites who are able to hide their  personal culpability behind the double-blind of the state and the corporation.

A byproduct of the the Post-Ethical Society is, increasingly, what I call the "Death of Shame," which goes far beyond the hubris and venality of the Ruling Elites and increasingly infects our whole society in increasingly unexpected ways.  The desire to be noticed-- Look at me!-- seems to trump everything.  Facebook, Twitter, Youtube, Tumblr, etc., are all designed to allow the individual to sell himself or herself to the free market for, well, free.  But there is a cost: the loss of privacy and the loss of any sense of shame.

The good news is that the neoliberal Ruling Paradigm cannot last for much longer.  The cracks are already starting to show themselves, and the secular equivalent of the Protestant Reformation is bound to happen, although it may still take decades for current efforts to metamorphisize into an effective reformation movement.
Posted by Tao Jonesing at 9:28 AM

Reinvent the Wheel Every Day. It's Good for Your Mental Health.

I was recently accused, by a scholar I greatly admire, of "reinventing the wheel."

While I understand and appreciate his effort to reduce the burden of my sojourn, I was immensely proud that I had, in fact, reinvented the wheel.  I did not know that this particular "wheel" actually existed, so the fact that my model of history, which is really a radical departure from current models, reproduced it independently makes me feel pretty darn good.

Finding your own way is worth it, and doing so may help to confirm that what others have found is, in fact, valid.
Posted by Tao Jonesing at 11:55 PM

Recently, I spent some time trying to understand so-called "Postmodernism."  While many argue that Postmodernism is incapable of definition, that's only because the word "Postmodernism" itself became a pejorative term applied to anything viewed as contrary to conventional wisdom.  If Marx were alive in the "Postmodern" era, he would have been falsely accused of being a Postmodernist.

Postmodernism is not a regime of word games, as some people seem to convince themselves it is.  Rather, at the heart of Postmodernism lies the realization that our words ultimately fail us because the same words mean something different to different people.  This is not to say that reality is subjective so much as it is to recognize that our ability to communicate objectively is hampered by the mismatch in understanding between the speaker and the listener.  This kind of observation is often reduced to a kind of absurd abstraction that reality is somehow "linguistic," but, frankly, that is pure bullshit peddled either by ignorant assholes or opportunistic assholes.

What Postmodernism boils down to, at least in political philosophy, is a belief that "meta-narratives" are not possible because our language is incapable of conveying the same objective meaning to all who hear the meta-narrative.  Postmodernist theory was developed to extract an understanding of the subjective filters unwittingly applied by speakers to their speech.  Ultimately, this is the exercise in optimism, not pessimism, because Postmodernists would not have bothered to try to understand if they believed objective understanding to be impossible.

Enter Neoliberalism.  I have discussed the "Double Truth" (or Double Lie) of Neoliberal doctrine.  Neoliberals are, ultimately, Modern Realists, and they are masters at co-opting the political theory of others to advance their agenda.  For example, Neoliberal guru Murray Rothbard openly advocated using Leninist tactics to drive the Neoliberal agenda.  As the current establishment is Neoliberal, they have discovered ways to apply Postmodern analytics to protect the establishment rather than attack it.  Postmodern tactics in the hands of the State amounts to agnotology, i.e., the deliberate creation of ignorance in the populace.  This is really nothing new, as "Postmodernism" was well known in ancient Greece, when folks like Plato and Aristotle were the Frank Lutzes of their time.

The key to understanding the difference between a Postmodernist, a modernist and a Neoliberal bullshitter is that a Postmodernist rejects any "meta-narrative" while seeking to understand the social power-driven basis of current meta-narratives, the Modernist offers his own alternative "meta-narrative," and the Neoliberal bullshitter shrugs his shoulders and insists that we can't know anything until everybody agrees (while studiously disagreeing, even when his position is untenable).  If you apply this understanding, you will quickly find that a great many people accused of being Postmodernists are actually true blue Modernists while Neoliberals are just opportunists who manufacture dissent and consent at will, as befits their Modern Realist roots. 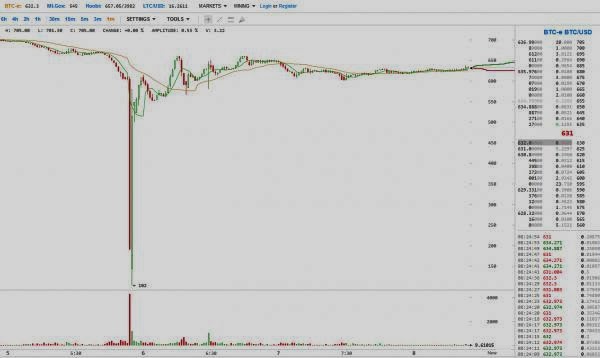 Of Two Minds, Both Not All That Perceptive

The answer is no.  Next.

First, Bitcoin is no more a digital "currency" than a share of Apple stock.  Like any (in)security, Bitcoin is a bet that people swap for value.  Nothing more.  Nothing less.

Second, the powers that be will never allow anybody to control the Money Power that is theirs by right. This dictate is thousands of years old and won't be defied by Austrian Cargo Cultists like CHS.  I wish you luck.

But useful idiots are useful.  Unfortunately, CHS is most useful to the windmills he believes he tilts against.